Wisdom is the Most Honorable and Best Knowledge.

Posted on January 6, 2013 by marklangley

What better subject to contemplate on the Epiphany- a feast in which kings from the east found wisdom lying in a cradle and worshiped Him as that which is most honorable.

So far – just to recapitulate we have discussed St Thomas’ first three attributes of wisdom (which it goes without saying is a ‘science’ about first causes and principles):

And now, finally, we are going to say that Wisdom is the most honorable and therefore best knowledge.

and then he explains

First, the science which God has is said to be divine; and second, the science which is about divine matters is said to be divine. But it is evident that only this science meets both of these requirements, because, since this science is about first causes and principles, it must be about God; for God is understood in this way by all inasmuch as He is one of the causes and a principle of things.

So Wisdom is divine- and then he hearkens back to the fact that wisdom is not really a human possession- confirming what we might be thinking, namely that if we have wisdom maybe we are just sort of borrowing it?

So there we have it – Wisdom is speculative, liberal, borrowed from God, and therefore absolutely divine!

Maybe it does make sense to expend considerable trouble to get some of it. Those three wise men really knew what they were doing. 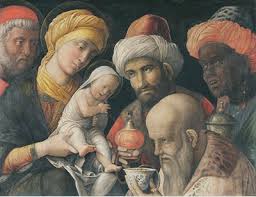 Presently, the founding Headmaster of Our Lady of Walsingham Academy in Colorado Springs (see www. OLWclassical.org), former headmaster and Academic Dean at The Lyceum (a school he founded in 2003, see theLyceum.org) Mark loves sacred music and Gregorian Chant and singing with his lovely wife, Stephanie, and their children.
View all posts by marklangley →
This entry was posted in classical education, truth for its own sake, Wisdom and tagged Aquinas, Epiphany, Magi, Wisdom. Bookmark the permalink.