Get Those Animals Out of My House!

According to the Evangelists, Our Lord cleansed the Temple on at least two occasions. St. John describes the first cleansing as having occurred directly after the remarkable miracle in which He saved the day at the wedding reception at Cana. The other Evangelists do not record this cleansing, but they tell us about another time when Our Lord cleansed the Temple approximately three years later-just after He entered Jerusalem with palms bestrewed in His path and hailed with Hosannas – shortly after that, He was crucified.

In this first cleansing, Our Lord seems particularly harsh on the animals. John says that “Jesus went up to Jerusalem,”

and found in the Temple those that sold oxen and sheep and doves, and the changers of money sitting: And when He had made a scourge of small cords, He drove them all out of the Temple, and the sheep, and the oxen; and poured out the changers’ money, and overthrew the tables;  And said to them that sold doves, Take these things hence; make not My Father’s house a house of merchandise.

Now, doesn’t that seem a little harsh? On the one hand, I can see why Our Lord might fashion a “scourge of small cords” to drive out men who were apparently swindlers. Who can’t feel a little anger against men who are making a profit from the piety of those who come to the Temple to offer sacrifice? I am imagining the disadvantaged, the widows and the poor, the blind and the lame, having traveled a great distance on foot to offer a humble sacrifice of praise to the Lord, only to be cheated and swindled out of the little money they had at the very Temple entrance. 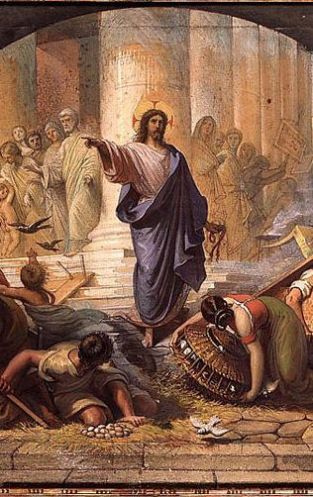 On the other hand, I am not a big fan of animals in church either. Maybe I am wrong, but I have always imagined that the doves, oxen and sheep were probably in the Temple vestibule and not actually milling about in the Temple itself. In any case, that the animals were somewhere in the Temple is clear. Not a good idea.

But Our Lord who was born in a stable has always seemed to have been sympathetic to animals. Doesn’t it seem a little harsh that He would take his scourge to them?

He drove them all out of the Temple, and the sheep, and the oxen…..

Now, I do notice that He did not try to scourge the doves, and that would be a little difficult anyway. But He displays none of His righteous anger to the doves beyond speaking to the dove sellers themselves saying, 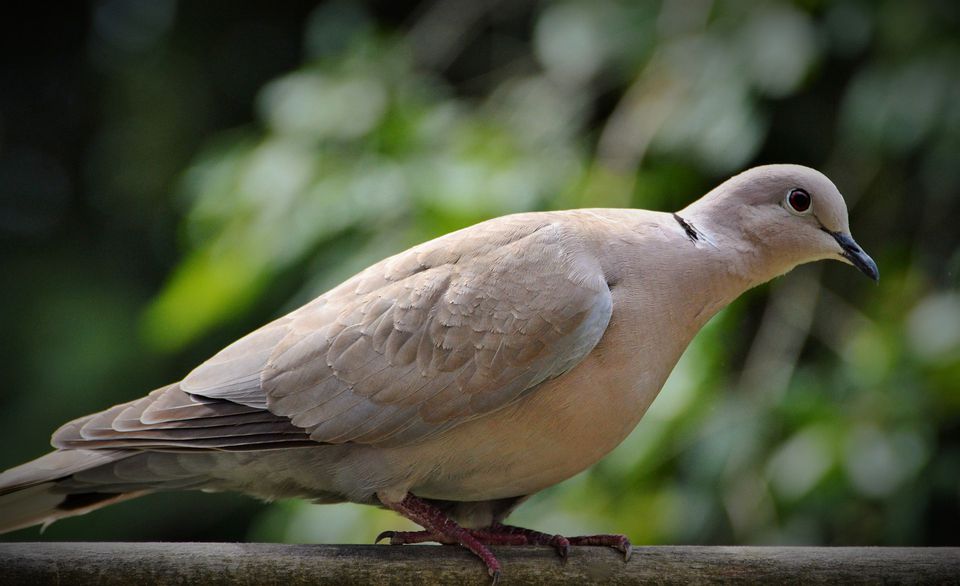 Aside from the literal signification of this passage, I am inclined to think that the naming of these animals, these three species in particular; oxen, sheep, and doves are meant for our edification in an even deeper way.

And, of course, we should be looking for something deeper here because Scripture is replete with wisdom and profound meaning if we just scratch, or perhaps graze, or even till beneath the surface!

I have to confess that I never would have thought anything more about this passage if it wasn’t for my favorite ‘go to’ book about the Gospel. What is that book?

You bet I would!

The Catena Aurea is a great way to become familiar with the very best things that any Father or Doctor or great Theologian or Scriptural Exegete (prior to St Thomas of course!) had to say about any and every line in the four Gospels. St. Thomas (without the aid of Google mind you!), in his seemingly omniscient and encyclopedic grasp of everything that was ever said by anybody worth listening to, has simply gathered up all of the best and brightest thoughts and strung them together as a sort of chain-like commentary. Voila! The Catena Aurea!

So what do we find in the Catena Aurea concerning this Sunday’s Gospel concerning the Lord’s first cleansing of the Temple?

Well, among many fascinating comments by Chrysostom, Augustine, Bede, and Alcuin, we also find this exquisite insight from Origen:

By the Temple we may understand, too, the soul wherein the Word of God dwells; in which, before the teaching of Christ, earthly and bestial affections had prevailed. The ox being the tiller of the soil, is the symbol of earthly affections: the sheep, being the most irrational of all animals, of dull ones; the dove is the type of light and volatile thoughts. 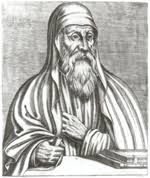 In other words, the oxen, the sheep, and the doves could very well represent our affections or our emotions.

I am not completely certain that I am understanding Origen correctly, but his remark certainly does inspire me with the thought that this Gospel passage really does have everything to do with the right ordering of our passions or affections.

First, which scriptural exegete do you know who does not take the opportunity to speak about the passions when he talks about Christ driving the money changers from the temple with righteous anger? They ask,

Is it ever justifiable to be angry even to the point of using aggressive force or even some sort of violence?

And then of course, they answer,

Look at our Lord in the Temple when He fashioned a scourge, and then He forcefully drove the money changers out of the Temple! This is sure a case of righteous and justifiable anger. Yes, it is good to sometimes use our passions – such as anger- to get things done. Especially if we are directing our passions to the service of the Lord!

So when our Lord cleansed the Temple, He certainly was illustrating a proper use of the passions, especially the irascible passions!

When we think about it, doesn’t Origen’s comment seem right on the money?

If oxen are heavy-set and phlegmatic to a fault, Doves are just the opposite. They are light and superficially sanguine.

The Lord is demonstrating to us in a forceful way that His disciples, those who are in His service, those who worship at His Temple, are not to be

On the contrary, authentic disciples of the Lord are anchored in the truth which is Jesus Christ. They serve His will unwaveringly and eagerly, because they have set their hearts on Him. They are filled with love for Him and are moved towards His service with consuming passion,  but passion under the direction of reason.

His disciples are filled with rightly ordered affections, even zeal, for His service and for His Temple!

And thus, just as His disciples remembered the words of the Psalmist when Our Lord cleansed the Temple, so may others remember these words,

For zeal of Thy house hath eaten me up.

when they witness the behavior of Our Lord’s true disciples now consumed by no less zeal for the house of God.

Academic Dean at The Lyceum (a school he founded in 2003, see theLyceum.org) Mark loves sacred music and Gregorian Chant and singing with his lovely wife, Stephanie, and their twelve children.
View all posts by marklangley →
This entry was posted in Catena Aurea, Origen, passions and tagged Aquinas, Bede, Cleanisng the Temple, doves, oxen, righteous anger, sheep. Bookmark the permalink.

4 Responses to Get Those Animals Out of My House!