Now I admit that the last post was on the silly side.

I am still kind of embarrassed about it. The Latin itself would probably best be described as some kind of Latin doggerel.

You will be relieved to know that I did dash it off rather quickly. So no one can accuse me of a too gross neglect of time in composing such a ludicrous work.

Nonetheless, I am willing to say that the central point of “Speaking Latin? Humbug!” is still something that I am doggedly willing to defend. Namely that,

It does not consist in learning to speak Latin or read Latin or write Latin. All of those things are secondary to the chief reason.

And what, you ask, is the chief reason for learning Latin?

The chief reason to learn Latin is to learn English. (as we said before right here )

Or more universally, the chief reason for learning Latin is that through it we learn the liberal art of grammar; through the study of Latin, we learn language itself!

Now that is a provocative statement, isn’t it?

We would expect him to reply

Why are you learning German?

He would surely reply

“I am learning German in order to speak German, Du blöde Kuh!”

And similarly suppose one were attempting to learn Chinese. Would we not expect that such a one was learning Chinese in order to read Chinese?

Why else would one learn Chinese with all those intriguing and mysterious characters?

When is the last time that you said to someone:

“Oh, so you are learning French eh? Can you say something in French for me? For example, how does one say ‘where is the nearest lavatory?'”

And if he is not even able to say that, after taking two or three years of the subject, we remark silently to ourselves “This fellow doesn’t know French- what a waste of time! He is either not a very good student, or he has a lousy teacher!”

The conventional measure of whether language study has been fruitful and profitable is the extent to which the student is able to speak, read and write the language he is studying.

Now, what do we mean when we say that the purpose of learning Latin is not really to learn Latin, but is rather to learn English?

I mean quite simply this. The study of Latin has the unique capability of revealing what language itself (or Language qua language, or if you like language as such) is to anyone who spends even the smallest amount of time studying it.

Latin is, for all intents and purposes, the embodiment of language in its formal aspects. That is to say, that Grammar, which is more or less hidden in this language or that language, is something delightfully manifest and accessible to the student in Latin.

The Grammar and principle of language inherent in every language are marvelously manifest in Latin.

Latin is such an effective vehicle for learning Grammar that one is almost inclined to think that the language itself is nothing other than a grammar manifesto; the culminating document achieved by the first Grammar Convention back around 700 B.C.

In every language, however primitive, there must needs be nouns and verbs and adjectives. There might even be pronouns and conjunctions and adverbs as well!

And don’t tell me that “a noun is a person place or thing” either! We have already spoken about this embarrassing confusion elsewhere.

And is Grammar really necessary? Does a precise and refined knowledge of Grammar aid us in any other important endeavor? Or is it only an art that is helpful for those who would like to conduct themselves courteously?; is it only an art that might help one to avoid committing an embarrassing verbal faux pas at tea a party? 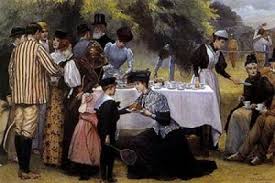 Just as that great general and master of armies and strategy, Julius Caesar, knew how to organize and martial his forces in such a coordinated and ordered manner that he was able to conquer all of Gaul, Greece and Egypt, so too is one, who has learned to martial his words through the art of grammar, able to be an effective thinker.

Just think of all those Latin paradigms as so many phalanxes and cohorts. Words ready for battle. Words arranged for effective thought and communication!

When a student memorizes all those Latin paradigmns he becomes a veritable linguistic general. He becomes a Martial of effective speech!

Presently, the founding Headmaster of Our Lady of Walsingham Academy in Colorado Springs (see www. OLWclassical.org), former headmaster and Academic Dean at The Lyceum (a school he founded in 2003, see theLyceum.org) Mark loves sacred music and Gregorian Chant and singing with his lovely wife, Stephanie, and their children.
View all posts by marklangley →
This entry was posted in classical education, Grammar, Latin, Liberal Arts and tagged grammar, Julius Caesar, Latin. Bookmark the permalink.