In Which the Lion and Ox Discuss the Furies

Posted on December 8, 2014 by marklangley

Lion:  That last post about Aeschylus’ Eumenides was too long – and frankly Langley began to lose me when he started talking about conscience. The lengthy citations were no help either.

Ox: Yes, the post was rather long-winded. Langley talks too much in general.

Ox: Especially if the citations are not precisely to the point.

Ox: But citations do break the monotony of the page and add some visual variety for the reader.

Lion: Yes they do- and that is important especially when reading long and abstruse discussions about ancient Greek literature! One suspects that he includes citations simply for the visual effect. I don’t blame him for that. Anything he can do to spruce up the visual effect of his blog would help.

Ox: Either that, or perhaps he is just trying to appear like an authentic intellectual. Any nitwit with access to the internet can masquerade as an intellectual nowadays. But the veil is thin indeed.

The real thinker, the quality mind, demonstrates worth not through the number and variety of lengthy citations, but rather through coherency of thought.

Lion: Yes indeed- and speaking of the coherence of Langley’s thought. What did you think about his interpretation of the Furies?

Ox: You mean that the Furies represent man’s conscience?

Lion: Yes, what did you think of that? Did you agree?

Lion: Indubitably. But, if truth be told,  I am tired of this interpretation and actually just a little annoyed by it.

Ox: How so? Despite the obstacles in reading his stilted prose, despite the trouble in keeping oneself awake through his long winded speeches, despite his tendency towards exaggeration and circumlocution, I thought Langley’s general point was still valid-namely, that the plays of Aeschylus, contain compelling and beautiful teaching about man’s nature; we find insight into the nature of man with respect to his soul and his conscience.

Lion: No. Not that I disagree with you. In fact I think you are entirely correct. If Langley had said that, I would have been content.

The works of Aeschylus are powerful in their testimony about the nature of man, his soul, his passions, his conscience, the natural law….and I would add with respect to the Eumenides…the natural horror that man feels when he transgresses his own conscience, especially when he commits grievous unnatural acts.

Ox: Wasn’t that what he said?

Lion: No! Langley was maintaining a direct comparison between the Furies and man’s conscience. Just as the Furies relentlessly pursued Orestes and gave him no rest, so does the conscience pursue and give no rest to a man who has committed sin.

Lion: Yes it is obvious. But it is also wrong.

Lion: Yes quite wrong, and I’ll tell you why.

Ox: I would be more than obliged if you did.

Lion: Yes, I will be more than pleased to explain.

Ox: I would be thrilled to hear the explanation.

Lion: Well then listen to me just a little longer. Will you do that?

Ox: I am prepared to listen to you forever as long as it doesn’t take much longer.

Lion: Well good! Then let us proceed….Incidentally, Did you borrow that line from Oscar Wilde?

Ox: Well not precisely, but I did take the central idea from him.

Lion: Yes no doubt from The Importance of Being Earnest. 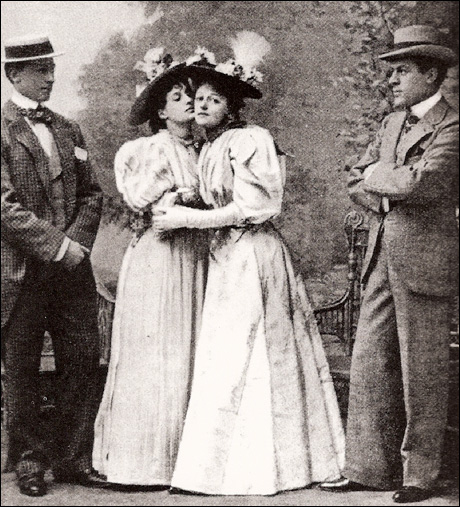 Ox: Precisely! As I remember it, the sentiment came at the end of the play directly before the final revelation of identities which ushered the story to a peaceful and happy conclusion.

Lion: Yes, now I remember it vividly. This is the precise point when Jack found the handbag.

Ox: Yes indeed the very climax of the play.

Lion: I had a major role in that play in high school.

Ox: Did you really?

Ox: What part did you play?

Ox: Jack. Well that is practically the lead role.

Lion: Algernon has a very large part as well- as do Cecily and Gwendolyn. I am not certain which role is the largest. But Jack did get the last line- here is how the play wrapped up:

Ox: Yes I remember now. Thank you. A terrific play! Though not on the same scale as Aeschylus’ Eumenides.

Lion: I agree. One would not want to confuse the works of Oscar Wilde, as delightfully funny as they are, with the timeless works of Aeschylus. I don’t suppose Oscar Wilde fancied himself on the same plane either. I have a sneaking suspicion that Wilde’s works are already beginning to suffer the slow slide into oblivion, as is the doom of every inferior work, whereas the works of Aeschylus have a demonstrated immortality.

Ox: But you were going to explain why the Furies in The Eumenides should not be compared directly to man’s conscience.

Lion: Ah yes!  Thank you for reminding me. I would be more than happy to explain if you feel ready.

Ox: I do feel ready.

Lion: Then let me proceed.

Ox: Proceed then at once with all speed!

Lion: The Furies are ugly are they not?

Ox: Ugly? The Furies are perhaps the ugliest beings invented by the human imagination. What with their hair and waists encircled by serpents, their continual hissing and shrieking and yelling…their bloody, bristling, gory appearance. Ughhh! I shudder to think of them.

Lion: Yes, the Furies, goddess of the night…born from blood! Ugly indeed!

Lion: And are the Furies cool and deliberate in their activity or do they appear more as bloodhounds and passionate avengers?

Ox: They seem anything but cool in their deliberations.

Lion: I agree. The Furies with their shrieking and horrid appearance are not pleasant to think about, and it is no wonder that Apollo wants no part of them in his Temple.

Ox: I agree, but what does this have to do with conscience?

Lion: Well– is not the conscience a judgement of reason on the moral quality of our actions?

Lion: Yes, and conscience is something which is more on the side of reason than the passions, correct?

Ox: Well, yes they do. I see what you mean now.

Lion: Good, I am glad. Conscience is not an ugly thing is it?

Lion: Does conscience shriek and yell and hiss?

Lion: Conscience is not some gory, black, snaky thing is it?

Lion: Surely a god like Apollo would not bid us leave our conscience outside his temple.

Lion: Then I think it is settled. The Furies do not represent conscience.

Ox: Settled! The Furies do not represent man’s conscience.

Lion: We might rather say that The Furies represent the horror, the shock of emotion that a man feels when he recognizes that he has transgressed his own conscience.

Lion: Yes, the internal horror and shame and fear and self loathing that naturally attends a man when condemned by his own conscience might be aptly represented by those ugly Furies.

Ox: Snakes and all!

Lion: Yes- the relentless pursuing of those internal feelings have the power to unnerve even the most steely-hearted man.

Ox: I have heard of such cases. The seemingly cold-hearted criminal who is relieved when finally discovered to be the rascal that he is. Some will even turn themselves in after years of trying to escape the law!

Lion: Yes, just such are they whom the Furies hound!

Ox: I like your distinction between a man’s conscience and the emotions that he is prone to feel when he goes against his conscience.

Ox: But perhaps Langley was speaking more generally. Perhaps he only meant to touch on the general fact of the existence of a conscience in all men which acts as a sort of emissary of the gods so to speak.

Perhaps Langley only meant to point out the fact that we find ample testimony to the reality of man’s conscience in Aeschylus. And Langley thinks that modern ears would benefit from this testimony.

Lion: What do you mean by referring to the conscience as an “emissary of the gods?

Ox: I only mean this. A good functioning conscience admonishes us about the Eternal Law or, if you please, more precisely about the natural law. This is why he cited Newman’s famous words describing the conscience as

“The aboriginal Vicar of Christ”

Ox: And I think  it is certainly the case that the works of Aeschylus do in fact bear powerful testimony to the existence of the Natural Law, don’t you agree?

Ox: And for men in all ages this is an absolutely crucial doctrine taught by nature herself.

Ox: An important doctrine especially for those who do not have the benefit of sound Christian doctrine.

Ox: And so this is why I don’t take too much exception with Langley’s thesis that the Furies may be interpreted as giving testimony to the existence of man’s conscience.

After all, to feel horror and shame and fear at transgressing one’s conscience presumes that one has a conscience.

Ox: And it was really just this idea that Langley was all excited about. I think he deserves more credit.

Lion: But, his interpretation was not…

Ox: Lion, sometimes we need to see things in general first before we work out all the particulars.

And further, I don’t think Langley is all that long-winded. Actually I quite enjoy reading him. You may be even surprised that I even find his tangents instructive from time to time.

Presently, the founding Headmaster of Our Lady of Walsingham Academy in Colorado Springs (see www. OLWclassical.org), former headmaster and Academic Dean at The Lyceum (a school he founded in 2003, see theLyceum.org) Mark loves sacred music and Gregorian Chant and singing with his lovely wife, Stephanie, and their children.
View all posts by marklangley →
This entry was posted in classical education, discussion, Literature and tagged conscience, Eumenides, Importance of Being Earnest, Newman. Bookmark the permalink.