Today, Holy Thursday, is the day for singing the ancient chant Ubi Caritas!

Which I translate freely,

Where charity and love are, there is God. The love of Christ has gathered us into one. Let us exult, and let us take delight in Him. Let us fear and let us love the living God. Let us love out of a sincere heart.

This of course is only the first verse. But it is beautiful! And totally appropriate for today’s feast!

Apparently this chant was composed sometime between the fourth century and the twelfth century. Now how is that for historical precision? 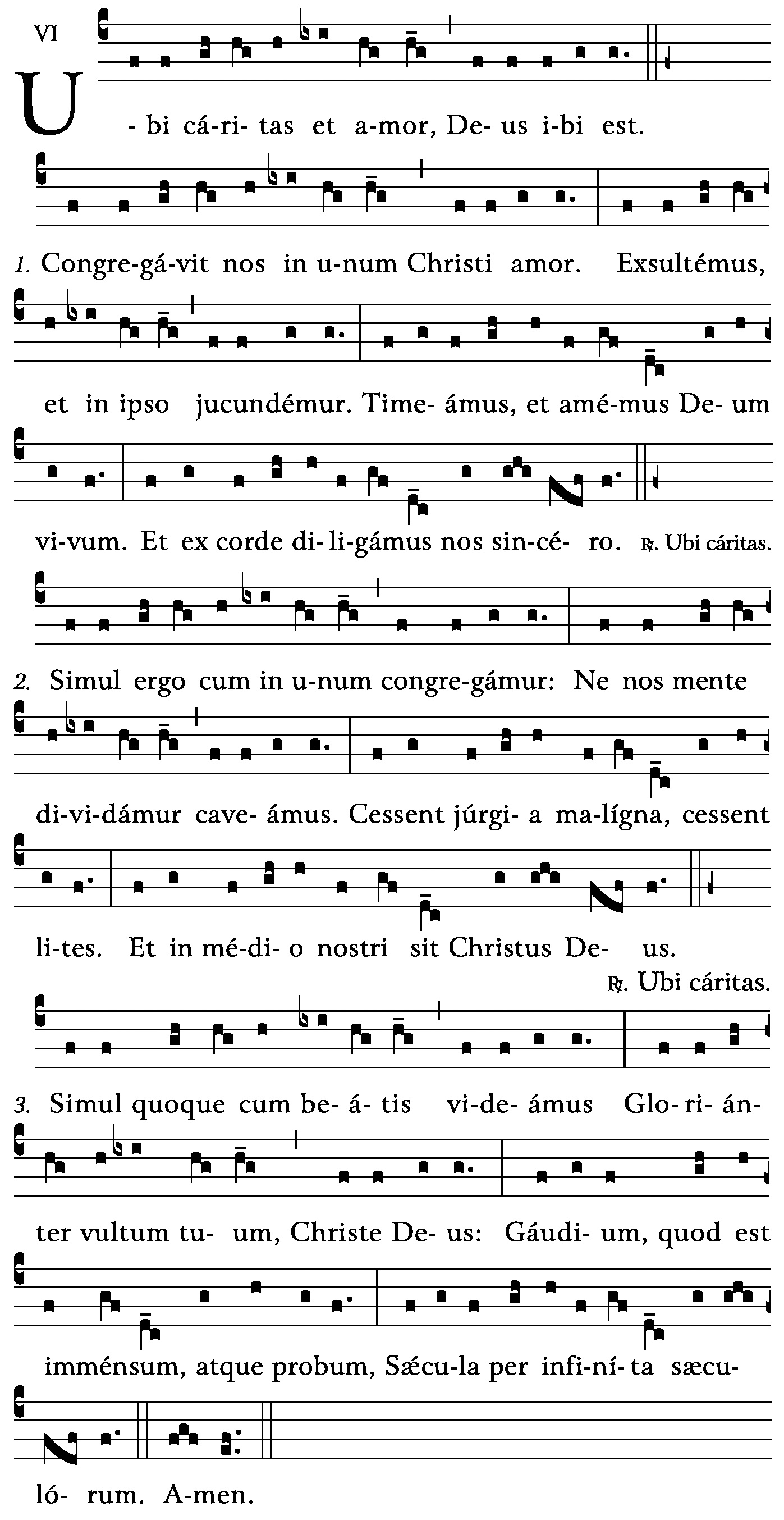 According to one, Mr. Aaron Green,

What began as a Gregorian chant that some music scholars believe originated before the formation of the Catholic Mass, “Ubi Caritas” (“Where Charity Is”) has evolved into many iterations and compositions. The actual origin of the chant is unknown and ambiguous, although musicologists and researchers believe it was written between 300 and 1100 CE

I am not sure what Mr. Green means by “before the formation of the Catholic Mass,” given that Our Lord formed and instituted the “Catholic Mass” on the Thursday before he died.

In Sacrosanctum Concilium we read,

47. At the Last Supper, on the night when He was betrayed, our Saviour instituted the eucharistic sacrifice of His Body and Blood. He did this in order to perpetuate the sacrifice of the Cross throughout the centuries until He should come again, and so to entrust to His beloved spouse, the Church, a memorial of His death and resurrection: a sacrament of love, a sign of unity, a bond of charity [36], a paschal banquet in which Christ is eaten, the mind is filled with grace, and a pledge of future glory is given to us [37].

Nonetheless, when I open my Liber Usualis (“The Usual Book” which contains all the normative and usual Gregorian chant that anyone would ever need- except of course in unusual times and circumstances!)

I find Ubi Caritas, on page 664, as the last antiphon offered to be sung during the washing of the feet ritual. There appear to be at least nine (yes, count’em, nine!) different antiphons that can be sung during this ceremony.

Now it seems ambiguous to me (are we really supposed to sing them all?), but the instructions in my Liber says,

After the Gospel, whilst the Priest performs the ceremony of the washing of the feet, the following chants are sung.

I have always admired the choir that can sing all nine antiphons before the priest washes twelve feet. Perhaps this is an indication of how much time the priest should spend washing each foot. Or, speaking as a choirmaster with nine antiphons and psalm versicles to sing, maybe there should be mandatory policy that requires washing both feet! With twenty-four feet to be washed, I think we could squeeze in all those antiphons and maybe even repeat a couple.

Although Ubi Caritas is certainly among the most beautiful hymns in the chant repertoire, this side of heaven we will never know the answers.

Presently, the founding Headmaster of Our Lady of Walsingham Academy in Colorado Springs (see www. OLWclassical.org), former headmaster and Academic Dean at The Lyceum (a school he founded in 2003, see theLyceum.org) Mark loves sacred music and Gregorian Chant and singing with his lovely wife, Stephanie, and their children.
View all posts by marklangley →
This entry was posted in beauty, Easter, Feasts, Sacred Music, Sacrosanctum Consilium, The Mass, The Passion and tagged Holy Thursday, mandatum, Sacrosanctum Concilium, ubi caritas, washing of feet. Bookmark the permalink.