Why I do not want to be the King of Scotland

Posted on February 25, 2020 by marklangley
I’m not so certain that I want to be king of Scotland anymore.

After reading The Tragedy of Macbeth with my students, I am having a difficult time shaking off a sense that life is meaningless when worldly ambition is the governing principle.

In Act II, King Duncan has been dispatched “to heaven or to hell,” by his own kith and kin- nay more even by his host and hostess who are now able to supplant him as king and Queen of Scotland. One would think that this would be enough to bring some kind of pleasure even if we grant it a guilty one. But Lady Macbeth dispels any doubt about this pleasure in Act III,

LADY MACBETH
Nought’s had, all’s spent,
Where our desire is got without content:
Tis safer to be that which we destroy
Than by destruction dwell in doubtful joy…

And then Macbeth himself confirms the sentiment saying,

MACBETH
…better be with the dead,
Whom we, to gain our peace, have sent to peace,
Than on the torture of the mind to lie
In restless ecstasy. Duncan is in his grave;
After life’s fitful fever he sleeps well;
Treason has done his worst: nor steel, nor poison,
Malice domestic, foreign levy, nothing,
Can touch him further.

You
Langley, you are mistaken about the intent of the author here. Of course Macbeth and Lady Macbeth are not content, of course they are miserable. They have guilty consciences! This is another play about guilty consciences…just like that other one…what was it…er…

Do you mean Aeschylus’ The Eumenides?  I spoke about that play here if you’re interested.

Well, that’s a good point. I had failed to make that connection. I suppose Shakespeare’s Lady Macbeth does remind me a bit of Lady Agamemnon or rather Clytemnestra. 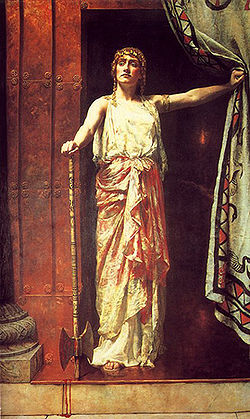 LADY MACBETH
Yet here’s a spot. Doctor
Hark! she speaks. I will set down what comes
from her, to satisfy my remembrance the more
strongly.

LADY MACBETH
Out, damned spot! out, I say!—One: two: why,
then, ’tis time to do’t.—Hell is murky!—Fie, my
lord, fie! a soldier, and afeard? What need we
fear who knows it, when none can call our power
to account?—Yet who would have thought the old
man to have had so much blood in him?

Doctor
Do you mark that?

LADY MACBETH
The thane of Fife had a wife; where is she now?—
What, will these hands ne’er be clean?—No more o’
that, my lord, no more o’ that: you mar all with
this starting.

She’s on the verge of a mental breakdown. Lady Macbeth is not so tough after all, even though she made herself appear so in the first act, when she said:

LADY MACBETH
…Come, you spirits
That tend on mortal thoughts, unsex me here,
And fill me from the crown to the toe top-full
Of direst cruelty! make thick my blood;
Stop up the access and passage to remorse,
That no compunctious visitings of nature
Shake my fell purpose, nor keep peace between
The effect and it! Come to my woman’s breasts,
And take my milk for gall, you murdering ministers,
Wherever in your sightless substances
You wait on nature’s mischief! Come, thick night,
And pall thee in the dunnest smoke of hell,
That my keen knife see not the wound it makes,
Nor heaven peep through the blanket of the dark,
To cry ‘Hold, hold!’

Clytemnestra would not have said that. I suppose she had ten years to brood and plan her husband’s murder. Perhaps over the decade while Agamemnon was fighting in Troy her blood had the time it needed to congeal making any such speech unnecessary.

Nonetheless, aside from the teaching about conscience and crimes against nature that we find in Macbeth, aside from his poignant portrayals of a man and a woman who are driven deeper and deeper into acts of deception and violence- and ultimately even to madness in the case of Lady Macbeth- Shakespeare is adding a lesson for us about worldly ambition.

If success in this world is the principal objective of a person’s life then “life is but a walking shadow, a poor player, that frets and struts his hour upon the stage, and then is heard no more.”

The ambitious man is a “walking shadow,” that is, his life is dim, empty and insubstantial.

Because, after a while the ambitious man will undoubtedly consider himself as a “poor player” on the stage; he will consider himself as one who has the appearance of being something that he is not. He will see that his life is that of one fretting and strutting for an hour upon the stage but soon he will be heard from no more. Other actors will soon take his place.

Time itself reminds us all of the potential meaninglessness of life. Each day passes much like the day before in the endless succession of tomorrows. All of our yesterdays are non-existent except in memory. And fools, those who esteemed themselves as something they were not, have simply returned unto the dust from which they came. For the ambitious life sometimes, if not often, is suddenly cut short without a proper ending – like a story told by an idiot.

Tomorrow, and tomorrow, and tomorrow,
Creeps in this petty pace from day to day,
To the last syllable of recorded time;
And all our yesterdays have lighted fools
The way to dusty death. Out, out, brief candle!
Life’s but a walking shadow, a poor player,
That struts and frets his hour upon the stage,
And then is heard no more. It is a tale
Told by an idiot, full of sound and fury,
Signifying nothing.

Presently, the founding Headmaster of Our Lady of Walsingham Academy in Colorado Springs (see www. OLWclassical.org), former headmaster and Academic Dean at The Lyceum (a school he founded in 2003, see theLyceum.org) Mark loves sacred music and Gregorian Chant and singing with his lovely wife, Stephanie, and their children.
View all posts by marklangley →
This entry was posted in classical education, Literature, Shakespeare, Temptation, truth for its own sake and tagged aeschylus, Agammemnon, Ambition, Clytemnestra, Eumenides, Lady Macbeth, Shakespeare. Bookmark the permalink.