My chief regret this summer is that I found no time to pack in another Dickens novel. Nothing says summer better than packing in a Dicken’s novel. Come to think of it, I don’t think I’ve read a Dickens novel since the last time I spoke about it here. Oh my! That was 2015.

Well I suppose the good news is that I can probably re-read Dombey and Son with renewed delight since I am quite certain I have forgotten every detail – one of the golden benefits of having a poor memory!

Well, instead of spending the summer break leisurely reading Dickens, I was more than happy to demonstrate once again one of my favorite themes. And what is that theme? Spoken most pithly and with the brevity that wisdom demands, it is this:

And nothing is quite so labor intensive as rebuilding old fences, refinishing decks, and engaging in the ancient art of setting bricks and tuckpointing! Those of us who are liberally educated are bound to know these various skills and arts as well as any person can know all of them simultaneously. The liberally educated man is one who can make a “fair off handed judgement” about just about everything as that god among philosophers, that maven of wisdom, that paragon of reasoning, that star among the firmament of sapiential thinkers….as the philosopher Aristotle says,

For an educated man should be able to form a fair off-hand judgement as to the goodness or badness of the method used by a professor in his exposition. [and here I am certain that Aristotle would not mind if we substituted for the word professor the word artisan, musican, painter, car mechanic, plumber, electrician, piano technician brick layer, etc.] To be educated is in fact to be able to do this; and even the man of universal education we deem to be such in virtue of his having this ability. It will, however, of course, be understood that we only ascribe universal education to one who in his own individual person is thus critical in all or nearly all branches of knowledge, and not to one who has a like ability merely in some special subject.

And so – does the educated man know about building fences? You bet he does!

Now fortunately, for me, I did not need to start from scratch. In my case I was merely rebuilding a fence that devouring time had blunted to the point that it was beginning to resemble a mouth missing multiple teeth.

Nonetheless, most of the posts were still usable and had some meat-although certainly greyed with time. But as every fence builder knows, setting posts is the most difficult thing about building a fence, and so in my case, I was fortunate to have only needed to replace four of them. But this presented its own difficuty insofar as one cannot replace a fence post without digging out the old one. The difficulty here lies in the fact that each fence post is ordinarily firmly planted in a two or three foot long concrete ‘footing’ buried just under the surface. Therefore in order to set a new post one needs to first extract the old footing in order to make room for a new footing. I am guessing that dentists would especially sympathize with the difficulty of this operation.

Unfortunately, I did not capture a photo of the brilliant process by which these concrete ‘teeth’ were exhumed from the ground.

In the not so distant past, I would dig through the Cleveland Heights clay for hours until the footing was loose. Then I would use long steel pikes to lever the concrete footing- tugging, pulling, and levering it until at last it reluctantly came out.

But after some research I discovered the joy of the Harbor Freight farmer’s jack! 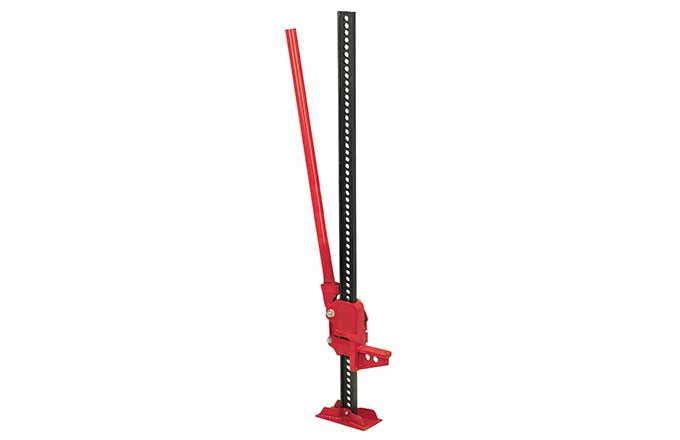 Oh how I wish someone had told me about this method years ago. One simply has to wrap a chain around the lip of the concrete footing and then with the help of a well placed farmer’s jack, one simply ‘jacks’ the concrete footing out of the earth! Of course this still requires considerable effort- but nowhere near the effort required by digging them out with a shovel!

Here is the general idea although the jack in the photo is considerably more complex and better equipped for the job than was mine.

Afterwards one is left with the empty hole. We are now ready to set the new post!

We should be thankful for the advanced stage of concrete-technology these days as there now exist ready-mix bags of concrete to which one simply adds water for our new posts. Thank goodness for “Quickrete!”

One only needs to make certain that the hole is about 1/3 the depth of the new post length (i.e. about 2.5-3 feet deep) and then (one) simply pours the quickrete about the new fence post, adds water and makes certain the post is plumb and square and generally perfectly upright- using a couple of spare boards to keep it so as the concrete dries.

It is always very satsifying to have a nice new pressurized 4X4 post firmly established and ready for supporting the new fence.

There are two ways to proceed once one has the posts ready. One can either purchase the ready made 8 foot sections of pre-built factory manufactured fencing panels for about $51 each, 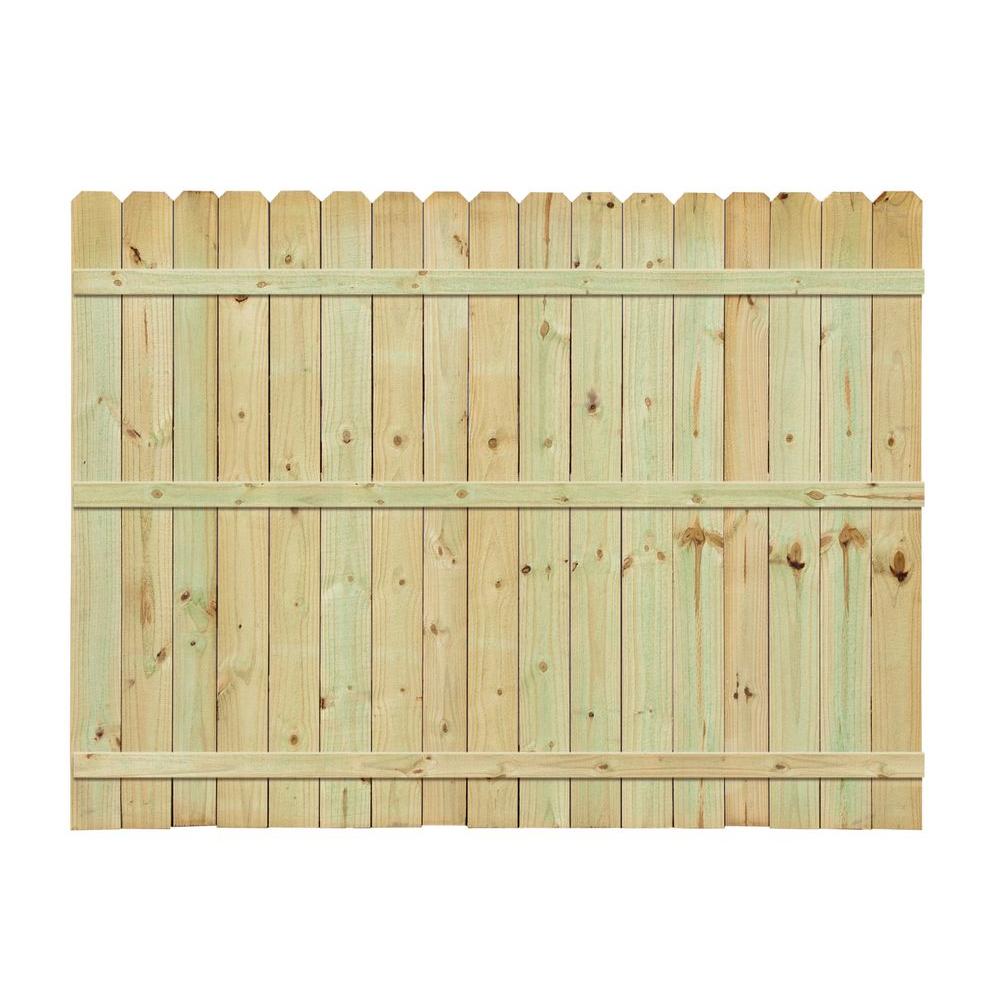 …or one can decide to build the entire panel by hand… rail by rail, board by board, pounding or drilling six nails or screws into each.

I chose the latter option thinking to save some money as each pressurized pine board was about $1.32 and the 2X3 pine cross beams were about $2.18 a piece. My thinking was that I could build each 8 foot panel for about $38.27 apiece (nails, screws and a gallon of wood preservative included) and save over $10 a panel!

Take my advice, spend the extra $10 for the pre-fabricated panels!

Even with the aid of two strong helpers, I am now certain that the extra cost of delivery would still have been worth the amount of time and energy it took us to make five trips to Lowes for the material.

Nonetheless, we do not regret improving our upper body strength, tenacity and coordination by hammering in the nearly 1500 nails and screws it took to affix each separate plank to the cross rails.

Hopefully the new fence will last twenty years, but I have a hunch that I will need to replace some of the older posts before that.

Presently, the founding Headmaster of Our Lady of Walsingham Academy in Colorado Springs (see www. OLWclassical.org), former headmaster and Academic Dean at The Lyceum (a school he founded in 2003, see theLyceum.org) Mark loves sacred music and Gregorian Chant and singing with his lovely wife, Stephanie, and their children.
View all posts by marklangley →
This entry was posted in liberal education works, Work and tagged Aristotle, De Partibius Animalium, farmer's jack, Fence building, quickrete. Bookmark the permalink.