As a teacher at a prestigious Catholic classical high school,  I have been thinking a great deal about floor joists, plywood widths, cast iron pipe and tile.

Why? Well…it’s summer, and this is just what classical teachers do in the summer!

The classically trained mind thinks lofty spiritual matters, and about matter itself and the material world during those long winter school months…but in the summer it immerses itself with great zeal and energy into the very heart of the physical world. Mind confronts matter in its myriad and individual circumstances, its messy imperfections and raw primal state with an unflappable confidence saying “this is only matter after all. How hard can it be?”

But do not confuse the classically trained mind with the “ivory tower intellectual!” The ivory tower intellectual gives a bad name to learning and philosophical pursuits. He lives aloof from the brazen realities of cast iron plumbing and horsehair plaster. He has never scorched his fingers with a propane flame torch when soldering copper pipes together. He has never melted lead off the end of a brass collar!

The ivory tower intellectual gets his practical work done by making phone calls.

But the classically educated mind does not hesitate to leap headlong into full-scale demolition work. He doesn’t have the snobbish contempt for matter (which is probably really a mask for his fear) that the “intellectual” has. The CLASSICALLY trained mind knows with religious conviction that mere matter – mere concrete, wood, bricks, cast iron or copper pipe is simply no match for the dynamic power that the mind has from chanting Latin forms. But this does not make him despise matter. No! It does however help him to appreciate the mind. 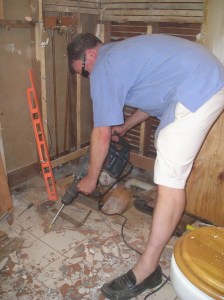 Two layers of tile over 3 inches of concrete. My sunglasses served just fine for eye protection.

Taking out that floor was tough…but not nearly as challenging as learning the rules for the sequence of tenses in Latin! Even if they used to make tile floors in second story bathrooms on 3+ inches of concrete!

Or take this example!

I had to laugh when I saw this semi hexagonal shape under the shower. I said to myself “Euclid would hardly consider this a regular polygon!” So I ripped it all out and am now ready to work with the “almost prime matter” underneath it all!

After hauling out 30 buckets of concrete and broken tile we have something we can work with!

There is no problem in the material world, as far as I can see, that the classically trained mind can’t overcome with the aid of a heavy-duty Milwaukee Sawzall. I love this tool. I even cut through those old obsolete steel pipes – except for the wider one in the middle which I think services some of my radiators.

In general I think my house is breathing a sigh of relief now.  Wouldn’t you feel better if someone removed 1500 pounds of material from your life?

But I did wonder how the house could remain substantially the same house with all of those parts removed.

Don’t worry about the broken orange level on the right, it still has the essential parts that I need to make this job level! I do wonder whether I should replace those ugly copper pipes at the top. They bend up from under the joists and then go behind the wall studs. Not quite up to classical standards.

Presently, the founding Headmaster of Our Lady of Walsingham Academy in Colorado Springs (see www. OLWclassical.org), former headmaster and Academic Dean at The Lyceum (a school he founded in 2003, see theLyceum.org) Mark loves sacred music and Gregorian Chant and singing with his lovely wife, Stephanie, and their children.
View all posts by marklangley →
This entry was posted in liberal education works and tagged bathroom renovation, Hitachi, manual labor, Milwaukee Sawzall, work. Bookmark the permalink.