Does Nature Act For A Purpose?

The title of this post is “Does Nature Act For A Purpose?” And it is a post that I have been wanting to post for some weeks now, mainly because there are some ideas in my head that I have admittedly received from another (i.e. a very wise person) and like most of my ideas they seem to stay in my head for only about two weeks, if that, and then other ideas come in and crowd these ones out, no matter how important they seemed to me at the time.

I don’t exactly know why this happens unless ideas are really explained through some electrical/particle theory. I don’t know much about electricity, but one can understand a little why some people would listen to that crazy second-rate poet Percy Shelley

when he uttered the nonsense “man is no more than electrified clay.”

This thought was, of course, not original to him but I could see why my ideas appear to get crowded out. There is a limit to how much electricity a thing can hold at one time!

But ideas are not simply electrical impulses, and the fact of the matter is that the ideas do not get “crowded out.” I just forget them for a while. That’s all. But let’s not discuss this minor point right now.

We are discussing whether Nature Acts for an end (or purpose)? But before we discuss this foundational  Aristotelian idea, we need to first discuss why it is an important idea for everybody!

One can’t just simply launch into ideas without a prior discussion about why the launch should be attempted…can one?

And I will not be accused of spontaneous intellectual launches! We want to make the case that if we launch into an idea, SO SHOULD EVERYBODY! Our launchings should be everyone’s launchings.

And this question “Does Nature act for an end or purpose?” certainly qualifies as being in the realm of ideas that simply have to be asked by every last human being (or asked by his parents or legal guardian… or I suppose even his paid advisors).

Allow me to propose four reasons why this is an important question.

But “wait” you say, “what on earth does the question mean in the first place? The question makes no sense! Nature is not an animal or plant or human being … so nature does not, properly speaking, act at all! Are we doing poetry now or what?!?”

Well, that’s a fair question and I guess we need to talk about what the question means in the first place.

“the winds ablowing up a real gale today.”

Blockquote (Alt + Shift + Q)“Like as the waves make toward the pebbled shore, so do our minutes hasten to their end”

as if the winds did blow and the waves did make toward the pebbled shore of their own will and accord.

To say that nature is acting when it is hot or cold outside seems like a mere custom of speech. The rain and snow, the heat and cold might all seem like random phenomena governed by the movement of inanimate particles and unintentional forces.

Or is nature acting for a purpose in all these cases?

What about  clouds for example? Do they act for an end or do they just sort of pass through the sky at random? I suspect that most of us look at them as if they are mere conglomerations of water particles being blown against their natural inclination by the wind…which itself is just another force produced by the convective force of heat and cold which is nothing other than molecules moving at various velocities (not speeds mind you!)

Of course as luck would have it, that second-rate-adolescent-poet Percy Shelley wrote a lovely little poem about clouds that starts like this:

I bring fresh showers for the thirsting flowers,From the seas and the streams;
I bear light shade for the leaves when laid
In their noonday dreams.
From my wings are shaken the dews that waken
The sweet buds every one,
When rocked to rest on their mother’s breast,
As she dances about the sun.
I wield the flail of the lashing hail,
And whiten the green plains under,
And then again I dissolve it in rain,
And laugh as I pass in thunder.

Now maybe I need to give Mr. Shelley a second look because even despite his saying that “man is no more than electrified clay” this poem about clouds does in fact seem to imply that clouds are a bit more spiritual than a mere random event of particles.

So I don’t know what to say about him. He might be a little at odds with himself which is an understandable trait …especially in adolescents.

And just think of the myriad intermediate steps between where we are now and where we intend to be at the end…perhaps lounging in the library of our mansion in Rhode Island complete with coffered ceilings and perhaps a painting of a dolphin!

Or maybe indulging in some cold fresh-squeezed orange juice in the platinum paneled “Morning Room” decorated with images of the muses! Ahhh…the dream! But it takes many, many intentional steps to arrive there… and then (oh cruel irony…or rather Infandum!) unfortunately only the liberally educated person would actually know how to use and enjoy the paneled library…the very last person likely to have the privilege of standing in it because he never  took those myriad steps to get there! 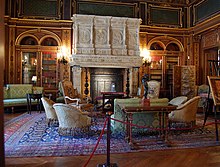 After all the inscription on the fireplace in this library reads,

“I laugh at great wealth, and never miss it;

wisdom matters in the end.”

which is a sentiment that only a liberal education would allow one to understand – but a sentiment not very friendly towards the production of wealth!

And it is the liberally educated person that would know how to properly enjoy, day after day, the quiet gardens and scenic verandas.

And of course it is precisely not the liberally educated person that lives in that house. No it is probably only some nineteenth century industrialist that could afford a place like that!

And why? Because he doggedly took very careful planned out intentional steps over many years to achieve the magnificent wealth that makes such a mansion possible. I mean imagine the kind of energy and careful planning it would take to build a steam boat and railroad empire. No… steam boat and railroad empires do not just come about by chance!…at least not ordinarily.

But does nature act like this? Does nature employ myriad steps in order to obtain some intended end…some rational planned out …even long-term goal?

Or do things in nature just sort of happen because of irrational forces and the properties of inanimate matter?

Mountains? What are they trying to do?

How about air? How about light? Do these act for an end?

What about man? Does he also have an end to which nature directs him? Evidently man is a product of nature, and the question here is “Does nature act for an end?

Hopefully the question makes some sense…. may I give four reasons why I think it is a good one?

“No” you say, “some other time…besides I am already convinced, why do we need four reasons why this is a good question?”

Well, because this question concerns all of us very deeply and the intellectual custom of the day is not very friendly to the concept.

Well we need to talk about the roots of our intellectual custom to settle that question… maybe some other time? I just want to get to my four reasons why “Does nature act for an end is a pivotal question.”

Academic Dean at The Lyceum (a school he founded in 2003, see theLyceum.org) Mark loves sacred music and Gregorian Chant and singing with his lovely wife, Stephanie, and their twelve children.
View all posts by marklangley →
This entry was posted in ad libitum, Custom, Uncategorized, Wisdom and tagged Aristotle, Cornelius Vanderbilt, Nature acts for an end, Shelley, The Breakers. Bookmark the permalink.