Catholic Classical Education Is About Life

The Lion in the Crypt of The Basilica of the National Shrine of the Immaculate Conception.

Catholic classical education, by the way, is primarily ordered to life. The whole point of classical education is life. To spread life. To increase life. To enrich life. To propagate and widen its extension. To deepen it and strengthen it. To perpetuate it and make it eternal.

Of course life is also about singing- especially in the Crypt Church of The Basilica of The National Shrine of The Immaculate Conception!

Lyceum students also consider life to be a steady alternation between playing basketball, baseball and skiing!

The simple reason for this is that to know the truth and to live is the same thing. That is why Our Lord and Savior said in John 14:6,

I am the way, and the truth, and the life. No man cometh to the Father, but by me.

And Aristotle points out the equivalency of knowing and living in Book IX of his Ethics when he says, 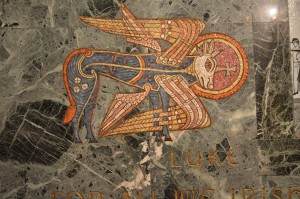 No wonder, then that of the over 1/2 million people marching in the recent March For Life, and the tens of millions that have marched in all the past Marches, for the last four decades, an enormous number of the marchers are Catholic students from Catholic schools, colleges and universities.

After the 2014 March For Life touring the Capitol

And it could be that this is exactly what many schools that have lost their intellectual moorings propose. These schools are like thieves that steal the intellectual patrimony of the students and instead give them the patrimony of slavery and death. Schools that have succumbed to the doctrines of utilitarianism, and therefore have handed their students over to the deadening task of mastering servile knowledge, are in fact a torture to any human spirit.

But Man is meant to be free. He is meant to live abundantly in the freedom that knowing the truth gives. As Our Lord says in John 8:32

And you shall know the truth, and the truth shall make you free.

The thief cometh not, but for to steal, and to kill, and to destroy. I am come that they may have life, and may have it more abundantly.

The Lyceum is dedicated to life.

This is the point of Catholic classical education. It is the only point really- that men can live life abundantly, happily, joyfully, in the fullness of truth in union with God.

Abbot Anderson of Clear Creek Abbey elevating the Precious Blood- a fitting way to punctuate the March for Life!

Presently, the founding Headmaster of Our Lady of Walsingham Academy in Colorado Springs (see www. OLWclassical.org), former headmaster and Academic Dean at The Lyceum (a school he founded in 2003, see theLyceum.org) Mark loves sacred music and Gregorian Chant and singing with his lovely wife, Stephanie, and their children.
View all posts by marklangley →
This entry was posted in classical education, Sacred Music, The Mass and tagged Aristotle, liberal education, March for Life, Mount Vernon, National Shrine of The Immaculate Conception. Bookmark the permalink.

1 Response to Catholic Classical Education Is About Life