Some things are never out of season and liberal education is one of them.

As a matter of fact the Holy season of Lent provides the Christian with an opportunity to focus on the first thing that anyone should know about Liberal education. 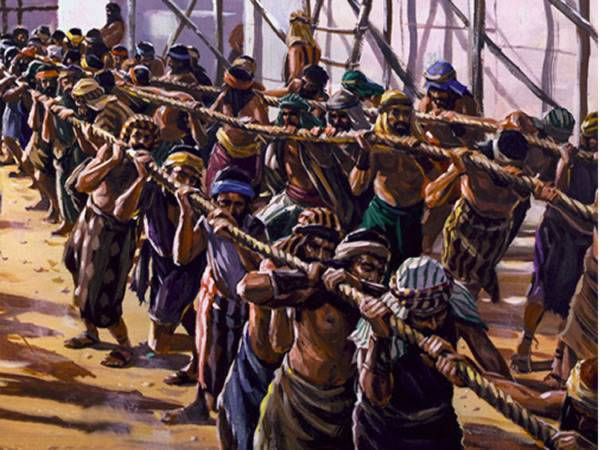 You see, no matter what else one wants to say about liberal education, there is just no getting around the fact that it has something to do with freedom.

And isn’t that just what Lent is all about as well? Isn’t Lent a time when the Church asks us to voluntarily fast and abstain and undertake some kind of sacrificial practice in order to free ourselves from unnecessary attachments? We are asked to make a special effort to empty our lives of things that distract us from the Lord; perhaps an excessive attachment to food and chocolate; perhaps an attachment to a certain behavior. But whatever these things are, they are aptly figured in Holy Scripture under the image of slavery.

As the Israelites wandered forty years in the desert before entering the promised land, so too we Christians traverse the forty days of Lent (which might seem like 40 years to some of us depending on how attached we are!).

Lent is a time when we are supposed to free ourselves from some things so that we might be free for other things.

The first kind of slavery that it frees us from is the slavery to fashion.

1. The Slavery To Fashion

My favorite living philosopher defined this sort of fashion in this way:

I don’t think it is necessarily wrong to read books which are on the New York Times Best Sellers list. But if this list were the sole principle of one’s reading selections, then we would have to say that such a one was indeed a slave to fashion.

Liberal education suggest that we read The Great Books of the Western World for starters.

Aristotle makes reference to this kind of slavery when in his Ethics he says that it is of no use teaching the science of Politics to the young because of the influence of their passions.

Hence a young man is not a proper hearer of lectures on political science; for he is inexperienced in the actions that occur in life, but its discussions start from these and are about these; and further, since he tends to follow his passions, his study will be vain and unprofitable, because the end aimed at is not knowledge but action. and it makes no difference whether he is young in years or youthful in character; the defect does not depend on time, but on his living and pursuing each successive object as passion directs.

First, it is liberal education that proposes that every human being should make an attempt to live his life in accord with reason. For Aristotle, virtue consists in allowing reason, rather than something else like the passions, to direct our actions. Thus, liberal education teaches that our perfection requires that we should attempt to bring all our passions under the influence of reason. This is an important contribution- namely that reason should rule, not the passions.

Let us move on to the next kind of slavery that liberal education frees us from.

This is my favorite sort of slavery! One is a slave to custom when his principal reason for thinking a certain way or acting a certain way is because of custom rather than because it is true or good.

For example, at some point, we might become aware of the fact that we think and act the way we do in great part because of

4. Liberal Education Frees Us From the Slavery to Plain Old Error!

Erroneous thoughts lead to erroneous actions. The one who is in error must necessarily be a slave, to a certain extent, to those errors.

But the dissenter could only be described as one who thinks and acts in the dark. His actions are those of a slave and not of a free person.

No wonder then that our Lord said, “The Truth shall make you free.”

Liberal education concerns itself almost entirely with reading the works of authors long dead in an attempt to preserve, or rather conserve, all that is best in literature and music and art. Liberal education is about reading and discussing the canon of authors to whom Western Civilization owes its origins. It is about immersing oneself in the very sources of civilization and holding fast to its elements and principles, to time-honored truths and traditions; to the vision of all those who contributed to civilization.

The end of liberal education is not first “to think for oneself,” but to know the truth. To know the truth that makes one free, this is the end of liberal education. Liber and libertas, in Latin, denote freedom, as opposed to servility and the servile. Liberal education is the education appropriate to free men and is a source of that freedom. Liberal education, this encounter with and conformity to the truth, frees man from enslavement to unruly passions, ignorance, current intellectual trends and public opinion. Once freed from these bonds, we might choose to live a good life, hold to the truth, and delight in beauty – not to please others or gain some practical reward, but simply because these things are good, or true, or beautiful. Once freed, we might even choose to serve others, as Christ did.

“And you shall know the Truth, and the Truth shall make you free.”

Why do we want a liberal education? Why, simply to make us free.

Academic Dean at The Lyceum (a school he founded in 2003, see theLyceum.org) Mark loves sacred music and Gregorian Chant and singing with his lovely wife, Stephanie, and their twelve children.
View all posts by marklangley →
This entry was posted in classical education, Fine Arts, Liberal Arts, liberal education, Uncategorized and tagged Duane Berquist, Lent, slavery. Bookmark the permalink.